Special Exchange Ticket for copies of

Altria Pendragon (Santa Alter) (one copy per Voucher) at the Event Shop.

You can increase the number of event items that drop by using Event Servants and the new Craft Essences introduced in the event.
Upcoming
/
Current
/
Past

★5 (SSR) Jack the Ripper and ★4 (SR) Nursery Rhyme make their debut in this summoning campaign. Add them to your party to increase the number of Magical Stockings that drop. In addition, other Servants that increase Magical Stocking gain - ★4 (SR) Marie Antoinette, ★3 (R) Robin Hood, and ★3 (R) Jing Ke - will have an increased summon rate. Event Craft Essences are in this summoning campaign. ★3 (R) Lightning Reindeer will also be available from Friend Point Summon for the duration of the Christmas Pickup Summon.

Jack the Ripper and Nursery Rhyme will be reintroduced to the Story Gacha at Chapter 4: London's release. 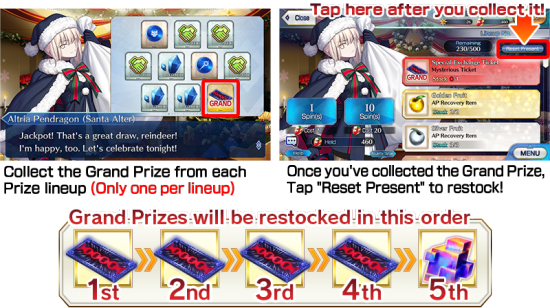 Earn Magical Stockings in event quests and give them to Santa Alter to get gifts from the present box!

are needed for each roll in the current lottery box. 1000x

are needed to empty each box. Lottery events allow the player to draw from item boxes, each of which (up to Box 5) has a Grand Prize. Once the Grand Prize has been drawn from the item box, you can either choose to reset the box and move on to the next item box (which you may choose to do if you cannot spend much time on the event) or continue drawing from the box until you have obtained the other items you want from it, or until it is empty.

For Box 6 and beyond, the whole box must be drawn from before it can be reset. However, the boxes can be reset an unlimited amount of times, and because of the valuable items within each box, it is often recommended to go through as many boxes as you can.

(No Golden and Silver Apple, 6 more Mana Prisms than Boxes 1-5)

It's December and Christmas is in the air. But something strange is going on in Chaldea... Waiting at the Rayshift destination was a mini-skirted beauty?! It's looking like this Holy Night won't be a silent night for the world's Masters. Prepare for a crazy journey with the mysterious Santa and her sack of dreams!
"Almost Weekly Santa Alter" starts December 1 st 7:00 UTC!
-
If this post gets EITHER 10,000 Likes or 2,000 Shares... We'll give away 3 Saint Quartz to all players! - For more information, visit http://fate-go.us/event/christmas2017.html