You can increase the number of event items that drop by using Servants of specific classes, and the event Craft Essences.
Upcoming
/
Current
/
Past

Drop Information is needed! If you have any to submit, please feel free to modify the Drop page or ask in #editors on the Discord if unsure.

You can also increase the number of manuscript drops by equipping Servants from specific classes in your party.

Note regarding The Merciless One and Maiden Leading Chaldea: these two increase the chance of Real or Fake enemies appearing in the stage. Do not equip both of them at once; they cancel each other out. The boost may be applied to an inherent 50% chance (or, more accurately, a 50-unit chance) of a Real or Fake enemy appearing, so even at a 300% (or 300-unit) boost, there is still a chance for enemies of the other side to appear. Refer to table on the right. As such, it is recommended to preferentially equip other event CEs that boost drop instead, rather than stack five copies of The Merciless One or Maiden Leading Chaldea.

Collect Manuscripts by doing event quests, and use them in the Original and Manuscript (Fake) Lotteries to get rewards. 2x Manuscripts are needed for each roll in the current lottery box. 600x Manuscripts are needed to empty each box. Lottery events allow the player to draw from item boxes, each of which (up to Box 6) has a Grand Prize. Once the Grand Prize has been drawn from the item box, you can either choose to reset the box and move on to the next item box (which you may choose to do if you cannot spend much time on the event) or continue drawing from the box until you have obtained the other items you want from it, or until it is empty.

For Box 7 and beyond, the whole box must be drawn from before it can be reset. However, the boxes can be reset an unlimited amount of times, and because of the valuable items within each box, it is often recommended to go through as many boxes as you can.

Leonardo Da Vinci's Lottery Dialogue Lines Needs updating. Below lines might be for original (non-rerun) version of the event.

Jeanne d'Arc (Alter) is a Limited Servant and will not be available in Story Summon after the duration of the event. Event Craft Essences are also in the pool.

A new costume for

Jeanne d'Arc (Alter), Witch of the Evil Dragon ver.Shinjuku 1999, can be purchased from the event shop. 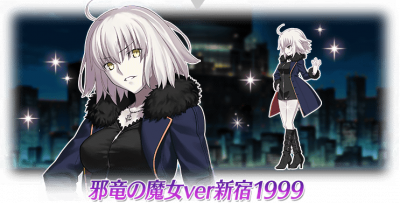