Upgrades after Rank Up 1. Released during Servant Rank Up Quests Part IX.

Upgrades after Rank Up 2. Released during Daily Report of the Sparrow's Inn.

Rank A+ NP is unlocked by completing Fionn's interlude Fionn mac Cumhaill, The Hero who Defeated the Gods. 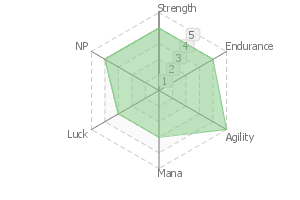