In Fate/Grand Order, the core gameplay revolves around Battles, where the player, as a Master, can make various decisions in order to eliminate all enemies. A quest consists of 1 to 5 stages of battle.

There are 3 types of stages: normal, Fatal Battle, and Grand Battle: 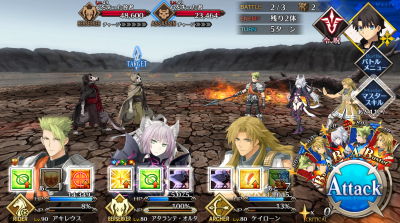 A stage always begins with the player's turn, where they are presented with battle information and possible actions.

In the Battle Screen, the player can perform various actions before tapping the Attack button.

This menu also shows up when the player is defeated and allows to revive the party. If the player does not have enough Command Seals available, full revival is also possible by using 1 Saint Quartz.

Once the Attack button is tapped, the Command Phase begins, and the player cannot return to the Battle Preparation screen. Any Critical Stars are randomly distributed among the 5 Command Cards, excluding Noble Phantasms, with each Star adding 10% Critical Chance to that Command Card.

At this point, Active Skills can no longer be used, but targets can still be changed. The battle animation speed can now also be changed with a button in the top right.

JP only: the player has the option to return to the Battle Preparation screen.

For more information on Chains and Attacks: see Command Cards.

Once the third Command Card is selected, the Servants will execute their orders.