Saber Wars is a Collection and Milestone event. Collect event currency to purchase items in the event shop, and reach milestones to earn rewards. The story was written by Kinoko Nasu, and getting 50,000 Points in the event earns you the limited 4★ Saber Altria Pendragon (Lily).
Upcoming
/
Current
/
Past 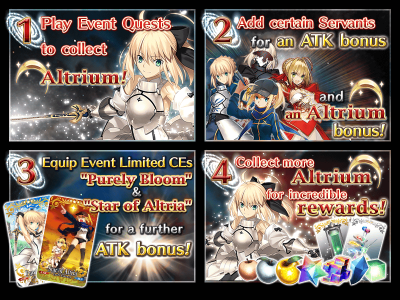 As soon as you collect Event Craft essences (from the Event Summoning Campaign or Event Shop), setting them up in your Friend Support as below is useful. This event is a bit different in that Sabers get attack and point boosts, so take that into consideration when setting support.

You can boost your damage, or increase the number of event items that drop by equipping the new Craft Essences introduced in the event:

The following event servants have increased Attack during the event, and also boost the amount of Altrium Points dropped. These bonuses are additive, so using more of these Servants increases your bonus. (Support servants count.) In the Quest Party screen, the total bonus of your current party appears in yellow next to the Close button; tap on the yellow イベントポイント詳細確認 (Check Event Point Details) button at the bottom to see which Servants give how much bonus.

Draw rates for Event Craft Essences have also been increased.

Earn Altrium points during this event to obtain the 4★ Saber


Rewards are obtained immediately upon earning the specified amount of Altrium; Servants and Craft Essences are sent to the Gift Box.

These rewards are earned based on the total number of Altrium Points collected during the event.

In addition, a Rank-Up Quest for

was added with this rerun.

In the year 2016, the battle over human history continues.

Chaldea, which is neither a Republic nor an Empire, is enjoying a brief, peaceful respite.

Then, an extraterrestrial lifeform suddenly descends from the stars.

What is the aliens' main objective? What is "Altrium?"

Saber Lily, from the League of Underdeveloped Noble Phantasms, begins her arduous training...