Setsubun Banquet Scroll - Hundred-Level Pagoda of Oni Nirvana is the first Setsubun, or Winter's End, event. Masters must clear Solomon to be able to participate in this event. Clear the Pagoda's Level Quests to advance upwards and obtain rewards.
Upcoming
/
Current
/
Past 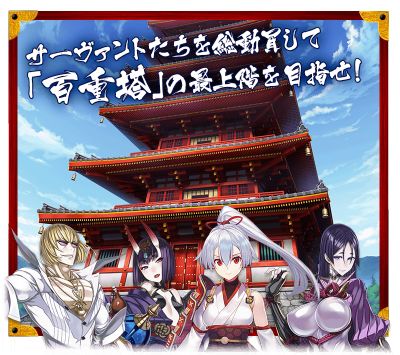 Gather your servants and scale the Hundred-Level Pagoda!

Obtained as a Conquest Reward.

Given out for clearing a certain number of Levels in the Pagoda.

will not be added to the Story Summon after the conclusion of this Summoning Campaign.

From 22nd Jan 2017 18:00 JST through the end of the event, all Ember Gathering and Training Grounds daily quests are available regardless of what day of the week it currently is.