Upon completing Singularity F (Fuyuki), Masters will be eligible to receive

x4
as a login bonus that will last for 7 days.

A new prologue is now available. you need to have cleared Götterdämmerung in order to play it.

Upon clearing Anastasia (Lostbelt No. 1), Mash will now earn a new passive : Stargazer's Journey
Only during Main quests, if Mash is in the party, everyone will have a +20% bonus in earned Bond points. (please note that Mash from supports don't work)

Players will now be able to select 3 persons they can "Follow". They can be outside of the friend list or in it.
While using Followed persons' Servants, you will be able to use their Noble Phantasm (even if out of friend list) and during Main Quests, they will earn more Friend Points than regular Friends 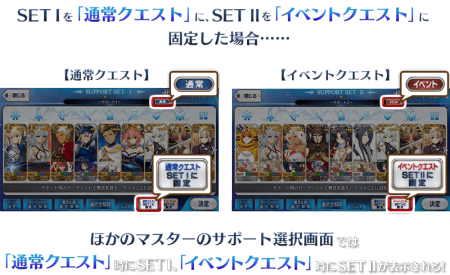 You will now be able to switch more efficiently from Event set and Normal set of Friend List. you can now assign one list to a set (Main or Event), and use the two buttons at the top to change the list directly.
Please note that you don't have any more lists. you can just choose up to two of them to switch more easily

Before starting a battle, blue and orange arrows will now show you if your servant will be effective or not according to it's class.

Another simple addition to the game that will now show the skill's level when using it.

When ascending a Servant to it's last ascension, rather than clearing the menu, it will now be possible to go to the Servant Strenghtening menu, like other ascensions.