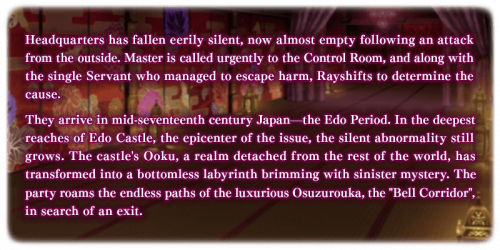 Progressing into the Labyrinth

This event acts like a Labyrinth. Upon clearing quests, you will be awarded Lanterns, that will be required to open new paths.
Some paths can lead you into a dead end, but hints will be hidden that will lead you into the right path

While Exploring the Labyrinth, you'll be able to acquire a "Seal Case".
While in possession, the Master Skills normally usable will not be the ones of the currently equipped Mystic Code, but the ones of the particular Seal Case you have

The Seal Case starts off with 3 basic skills:

Clear the Main Quest to unlock

were added with this rerun.