Sei Shounagon
will deal 200% damage during this event and have a 50% bond bonus.

Note: Aside from the below newly-introduced Craft Essences, all Valentine's Craft Essences given by/received from your Servants, including those first introduced in 2016, 2017, 2018 and 2019 boost

There are three event-limited items rewarded for collecting certain amounts of Sparkle Points. 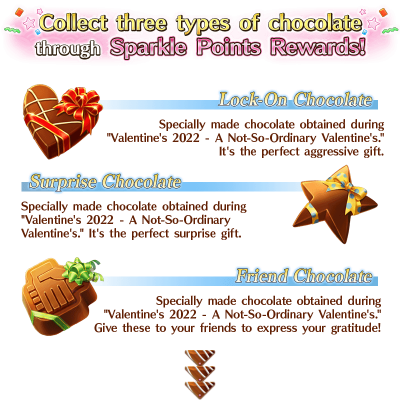 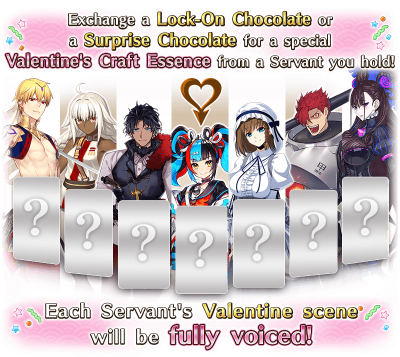 Lock-on Chocolate: Used to receive the Valentine's CE from a chosen Servant.

Surprise Chocolate: Used to receive the Valentine's CE from a random Servant.

Friend Chocolate: Used while completing quests to give the support Servant's user 200 Friend Points, rewarding the player using the chocolate with 10 Mana Prisms. Can only be used three times per user.

The summoning campaign will be released in two parts. Sei Shounagon‎ is a Limited Servant and will not be added to the story summon after the pickup period ends. Event Craft Essences are in both pools. 3★ Midnight Tension can also be summoned using Friend Points during the event period.

Only female Servants can be summoned from the below banner.

were added with this event.